We woke early to a chilly morning. A call from Janet Lagudi roused us all and it was lovely to hear a friendly voice. We are all a bit sick of the many rude Parisians considering they would be up a creek, not the Seine, without our tourist dollars.

We set off for Notre Dame and were buoyed by being towards the front of the queue for the Bell Tower climb, a queue which grew quite long quite quickly. A 10 am open was delayed though until 10.30 as we stood in the freezing cold – Annabelle said it was the coldest she had ever been in her whole life. The many officials with walkie talkies did not counter for the fact that one of the biggest tourist attractions in the world came to a halt because the cashier was stuck in the metro! It was worth the wait though. The views from the top were spectacular; the best in Paris. A 360o view around; the Pantheon, Eiffel Tower, Sacre Coeur and everything up and down the Seine. Also, you get up close and personal with the famous Gargoyles. After a visit to the Belfry we descended (more bloody stairs) and then made a visit into the cathedral proper. It is grand and beautiful as you all would either know or expect. We wrote some intentions in the dedication book. I hope God was watching. Mark was tempted to go to confession but we just did not have that much time to spare!

We separated after this, Annabelle for more shopping therapy at Au Printemps and the rest of us for more of Ile de la Cite. We checked out the prospective car park in front of Notre Dame which hit a hitch when they discovered ancient roman ruins dating back to the third century. It is now called Crypte Archeologique. From there we went off to see Marie Antoinette’s last digs, the prison of the Conciergerie. Mark found this disappointing as there was not a guillotine in sight! From there we strolled over to the smaller island, Ile de St-Louis, for a scoop of the famous Paris ice cream, albeit the smallest scoop, from Bertillon. We will never complain about NZ ice cream scoops again!

Our final visit was to St Chapelle, a thirteenth century gothic masterpiece built by Louis IX to house his holy relics (The Crown of Thorns and a piece of the Cross) which he purchased from the Emperor in Constantinople for more than 3 time the cost of building the church! Carbon dating of these relics revealed he had been fleeced. The church itself though has the most amazingly huge and beautiful stained glass windows depicting Biblical scenes from Genesis through to the Crucifixion. You could just sit there for hours and soak up their beauty. It seemed fitting to have such a soothing and restful ‘take’ on our last major attraction.

We met up with Annabelle and went on to buy some shoes for Mark that he had been spying all week. Then, we headed for the internet café before heading home and out to dinner to a small restaurant called La Maison de Verlain, just near our apartment. We were still faced with the 3 course meal deal, of varying prices, that seems to be the norm for Paris. The food was surprisingly quite good and it turned out that this place had once been the home of Ernest Hemmingway. The history just never seems to stop.

We turned in early as we were faced with a busy morning getting ready to head off to Madrid.

Hemmingway home and our last meal in Paris 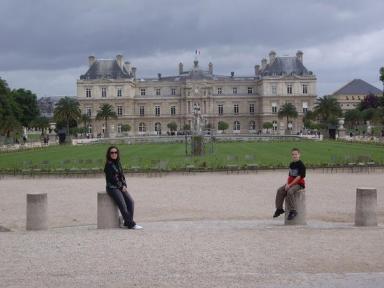