Our first full day in Marrakech was interesting. Mark and I woke to the sunrise call to prayer, a haunting yet comforting sound that filled the Medina. The sun was scorching by breakfast at 8.30 up on the roof-top terrace so we realised we would have to spend at least the middle part of the day at home. It was reassuring to see a number of other Europeans at breakfast though – at least we were not alone, which was our main concern on arrival the night before. We were still anxious about venturing into the maze of derbs though but some English girls put our minds to rest. They told us that we should expect to get lost but at least the locals are helpful and will guide us home, if even for a small fee. So feeling a bit more confident and armed with how to say ‘no thank you’ in Arabic, a phrase which was put to frequent use, we set out.

We soon discovered that our Riad was in an ideal location; just a 10 min stroll north-west of the central square which life in the Medina evolves around, Djemma el-Fna. The Vegetable Markets were on the way to the square and were to be or first destination. This was an overly glamorous term though as it is simply an area where locals squat selling their produce from mats on the ground. Check out the photos. From there we strolled on through the souqs, more lanes of market stalls, towards the Spice Markets. The souqs varied from being humble and simple to the high-end type with international shipping potential. It was seventh heaven for me (Mary not Mark) as, although there was the usual array of junk, there were more shops selling beautifully carved and ornate doors and windows than I could ever possibly have hoped to see in the one area. All the souq owners could speak at least 3 languages- Arabic, French and English – and all knew the current exchange rate for any currency that you wished to offer them; even those souq owners with only a few remaining teeth!

The Spice Markets were probably the most interesting of all though. This was an open courtyard surrounded by stalls where every spice and fragrance you could imagine was on sale. We sat down in the only “café” in the square for some excellent mint tea (we asked for the recipe but it seemed to be a closely guarded secret). We left that fragrant area and ventured into Djemma el-Fna. This is a much larger open square that is a constant hive of activity; restaurants, shops, hawkers, taxis, caleches (canopied horse drawn carts), snake-charmers, monkey trainers, street theatre acts and intimidated tourists…like us. We had the obligatory photo with the monkey which Mark paid too much for as they kept on hassling him for more pounds (if you speak English they think you come from England and they know the value of the pound!). We then decided to head home as the heat was amazing and we had had enough sensory over load for one morning. The locals were all very friendly with kind greetings and ‘Welcome to Marrakech’. The irony that this was a developing country filled with civil folk, whereas we had just left two developed countries with rude folk, was not lost on me! We headed back to the Riad for a few hours of rest and a dip in the plunge pool.

By 5pm it had cooled enough to venture out so we headed for the local Mosque but it was closed for a special service (Friday – der). We decided to just head back to the square for dinner, which we did slowly and with a bit of shopping. We also checked out the Club Med located just off the main square. We found this disappointing, just like any 4 star generic hotel, which made us realise how lucky we were to be experiencing the local charm of our Riad. From there we ventured to the safety of the roof terrace of one of the restaurants overlooking the square. We dined on the local fare of taijines and kebabs as we watched over the mayhem unfolding in the square below. Daytime was bad enough but apparently the place really ‘heats up’ at night…scary stuff! We wandered home after a bit more shopping (Annabelle) and finished with a glass of wine sitting downstairs in the courtyard. We were all very tired but pleased with having survived our first day unscathed in Marrakech and, with finding our own way home each time we ventured out!

Breakfast on the terrace 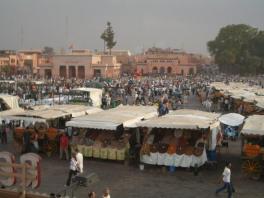 Evening in the main square

Mark and Tom in courtyard by plunge pool

Mint tea at the Spice markets

On way to the main square

Snake charmer in the main square