Flight from Istanbul to London. Only note worthy point on this flight was that the plane was half full with 11 yr old Turkish school children who cheered and clapped with great vigour when we finally lifted off and did the same when we touched down. The mind boggles as to what the teacher had told them before leaving school! The weather on arrival ok…cool but some sun. The apartment we booked is in nice and in a great location; just a 2 min walk from Paddington station , or 10 min if you follow Mark’s directions! Westpoint Hotel (Aspen Suites). We are also near some nice typically English pubs and a minute away from Hyde Park/Kensington Gardens. We ended up having a nice pub dinner at the local with Dom, one of Annabelle’s friends.

Mark and I went for an early walk through Dianna’s backyard of Kensington Gardens. Summer here is great….wet, grey skies and about 12 degrees! With such fantastic weather we decided to show Annabelle the key sights by way of the Open Top bus tour. We had a nice pub lunch and later hooked up with Zoe, a school friend of Ali.

Got up early again and Mark and I went for a walk through Kensington Gardens. We all then went to Westminster Pier and took a return cruise to Tower Bridge. From there we went to Westminster Abbey and took an audio guided tour. We were all quite hungry by then so headed to a pub for a meal. Mark and Tom then headed off to a Beatle’s walking Tour and Annabelle and I headed to Harrods.

We all met back at the apartments and headed out to Heathrow. Checking in was a night-mare with all the extra security especially as they now only allow one piece of hand baggage per person.

Anyway, in the Cathay lounge now on way to Hong Kong. All well and looking forward to catching up with Ali.

For Johny D: Calamari in London! 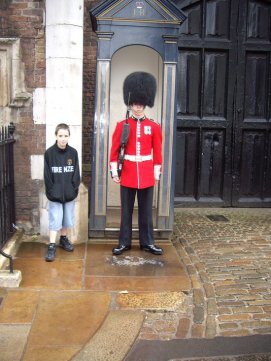 The only guard we could get close to 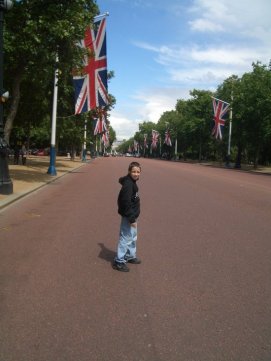 Tom near the Palace 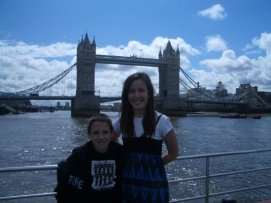