The morning was overcast for our trip out to Milford Sound. This involved a 4 drive and then a Fjord cruise, booked for 1.30 pm, so we set off from Queenstown at 7 am.

The weather worsened on the way out and we had lots of low cloud making for picturesque scenery but also patches of rain. We made one stop for coffee at the Five Rivers Cafe ( 1 hr from Queenstown) and then another at Te Anau (2hr 20 min from Queenstown) for sandwiches and rain ponchos! There isn’t a lot on offer once you get down to the Harbour area at Milford Sound, hence our supplies. There were a few more photo stops along the way but we arrived in time for the cruise, allowing for a bit of a wait to find parking. Note: allow plenty of time for this!

We were booked on one of the smaller cruise boats (75 pax) with ‘Mitre Peaks’ and this appealed to us. The cruise lasted for about two hours and simply did a loop out from the Harbour towards the Tasman Sea and, then, back again; Hugging one side of the Fjord on the way out and the other side on the way back. The drizzly weather offered one advantage and that was that there were many more waterfalls than usual. The sheer Fjord walls were quite spectacular even in the misty weather. There was some commentary from the cruise captain at times but we all believed the experience would have been enhanced if more information was provided. We were advised about the distinction between a ‘Fjord’ and a ‘Sound’ though: ‘Sound’: when a river eroded valley floods with water. ‘Fjord’: when a glacier eroded valley floods with water. Thus, Milford Sound is really a Fjord! So that was of some use and, although the weather wasn’t the best, we all considered the day to be worthwhile.

The sun appeared on our way back to Queenstown making for more pleasant driving and we were back by 7.30 pm. We pulled in at the Frankton Ale House for a pub dinner and Mark sure enjoyed the beer after his long day if driving!

Just out of Queenstown

On way to Milford Sound 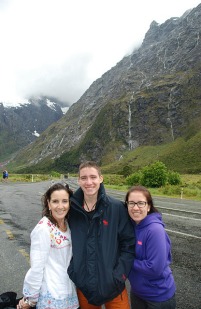 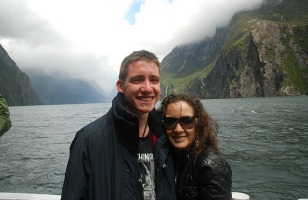 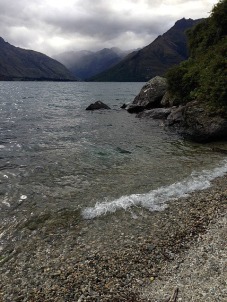 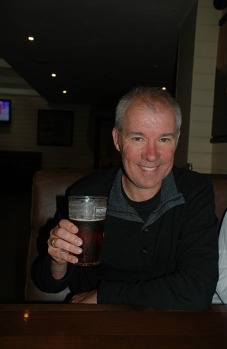