The long day of driving around Cathar Castle territory yesterday had left us all a bit weary and so we decided to take it a bit easier today. The plan was to have a leisurely morning before heading out after lunch to visit the Abbey at Villelongue and the historic village of Montolieu, a drive of about a 40 min drive north-west of our Gite at Marseillette.

So, a slow morning for Mark and myself meant heading out to walk at 7.30 am rather than 7 🙂 We headed west along the Canal du Midi this time and along past one of the Locks (yes…spelled with a ‘k’ not an ‘h’) before heading back to the village Boulangerie to buy a baguette.

Our first stop for our afternoon outing was at Villelongue Abbey which, sadly for us, was closed on a Monday, something we overlooked when we made a quick change of plan. From the Abbey we headed to the small village of Montolieu which is better known as the ‘Village of Books’ due to the dozen or so bookshops selling vintage and secondhand books. We spent a leisurely hour wandering the village which was very quiet given it being a Monday. There was an impressive 14th Century Church of St Andre which was built to be large enough to hold the whole village in times of danger or need. An unassuming cafe on the opposite side of the square from the Church looked like it might be open for a coffee and so we headed there to try our luck. On entering though this was somewhat like what Alice must have experienced when she fell down the rabbit hole in Alice in Wonderland. We entered through a fairly mundane door but then found ourselves in a vast and contemporary designed trendy restaurant with the young staff lunching and listening to loud music. They happily served us drinks however and we rested a bit before wandering the narrow village lanes on the way back to the car. The only deviation on the way home was to the large food store, Geant, so as to get supplies for dinner as we were having another night in. 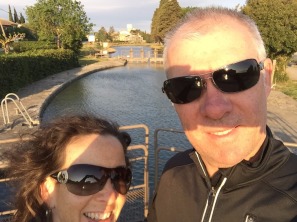 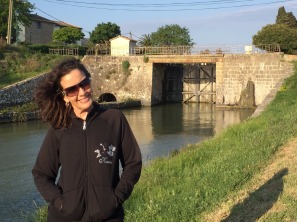 The Lock in the background.

View back along Canal to our Gite. 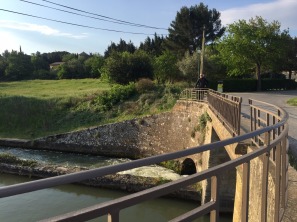 The Lock showing restaurant from the other night.

The small Village of Marseillette. 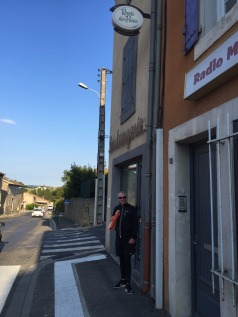 Mark with baguette from the Boulangerie.

Mary with St Andres in background.

The Alice in Wonerland place. 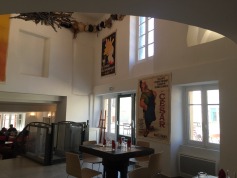 We added our bit to their wall.

Monument to Village of Books: Montolieu. 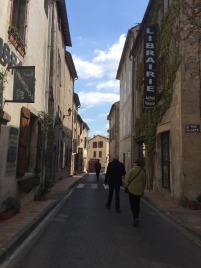 The village lanes in Montolieu.

Mark and Judy in village of Montolieu. 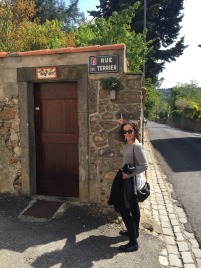 This one was for Oscar.