Wednesday 25th May: One full day in Brighton.

The morning was overcast but we still managed a walk although we’re back in our winter walking gear.

Breakfast at our B&B was an impressive event with an amazing variety on offer given it was such a relatively small business. It surpassed all of the Hotels we’d been in so far on this trip and Mark enjoyed a full English breakfast which brought back memories of his many years of work and travel to this part of the world.

The plan for the day was to visit the Brighton (Royal) Pavilion, the North Laine district, take a 2 pm guided walking tour and then do a bit more window shopping in the afternoon. (any other type of shopping is way too expensive here).

The Brighton Pavilion was a former Royal Palace built by George IV in 1787. We found out later during our walking tour that George IV had heard about the alleged medicinal value of the sea water and, thus, chose to build down here. The Pavilion is an amazing structure with external architecture influence by Indian &amp; North Indian Muslim themes yet the internal decor is lavishly and extravagantly decorated with a Chinese theme although George IV didn’t ever visit either region! The Pavilion was eventually passed on to Queen Victoria who did not favor the building and it was the ultimately sold for £53,000 and now rests in the hands of Brighton and Hove City Councils. The adjoining building of the Brighton Dome was originally built as stables for George IV but, in more recent years as we also found out later on our walking tour, was the site where ABBA won the Eurovision Song Contest with Waterloo and where Pink Floyd first performed Dark Side of the Moon.

The North Laine district is, not surprisingly, found just north of the Brighton Pavilion and that is where we wandered to next. Andy, our B&B host, had informed us that it is like the Haight-Ashbury district of San Francisco however, although having been to San Francisco, we have never been to this particular district and so have no idea if this is really the case. For us, it was a bit like London’s Portobello Road or an expensive form of Sydney’s Newtown area. North Laine is a quirky mix of second-hand clothing shops, cafes, pubs and expensive high-end fashion retail.

The 2 pm walking tour went for 90 minutes and was well worthwhile. Our guide, Julian, gave us many items of interesting information including how the first documented records about Brighton date back to 1086 and reveal that the area began as a Fishing village, how it was razed in the 1500s by the French and how it accelerated in popularity in the 1700s when a local doctor, Dr Russell, suggested the merits of visiting Brighton and breathing in the sea air, as well as drinking the sea water, as a way to improve one’s health. Julian also informed us that Brighton was only awarded ‘City’ status by the Queen in the year of Millennium, even though it fails the threshold test of not having a Cathedral. Julian also advised us that there are 300 pubs in Brighton and it is second, only to London, for the total number of restaurants. We thoroughly enjoyed Julian fleshing out the history of Brighton and we both felt that we had a better understanding of how the area had evolved to its current state.

The walking tour finished at around 3.30 pm and we went on to explore some of the shops in the nearby area but by 4.30 pm Mark couldn’t wait any longer. He had researched prior to our departure about a Craft Beer venue called Brew Dog and had been looking forward to this visit for the whole of the last 4 weeks and, so, that’s where we went next. The only real issue for him was not having a beer-buddy to both enjoy and discuss the merits of the four beers in his first Paddle. The staff there were impressed with Mark’s efforts and variously dropped by to chat with him about the spread of Craft Beers around the globe.

There is only so much beer one person can consume though and so, for dinner, we eventually headed to a Pub that was on our way home, Brighton Rocks. It was a quiet night here but the food was rather good. We were missing our Spanish dessert wines though and so went in search of a pub, wine bar or Off Licence that could help us out here. The two Off Licence venues we went to were staffed by Muslims who, not surprisingly, had never heard of a ‘Muscatel’. Even the Pubs boasting ‘Great Wines’ had to ask how to spell Muscatel. Not a good sign. So, after a few aborted efforts, we headed back to our dinner venue from last night, Ginger Dog, where we were able to at least sample a Botrytis. We headed home after that and tomorrow we head to Eton before catching a flight home.

Model of the Royal Brighton Pavilion.

Us at the Brighton Pavilion. 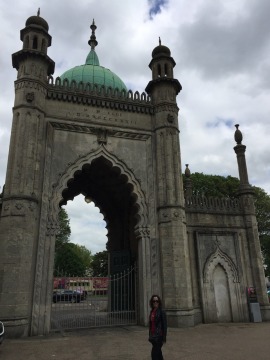 Us in the North Laine district. 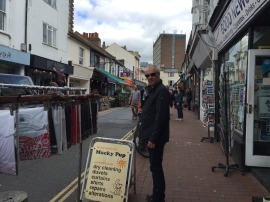 Yummy cakes there though! 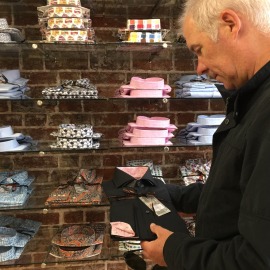 Expensive shirts however at 135 GBP!

This would have been good for when he was at RB!

This is a doosey! 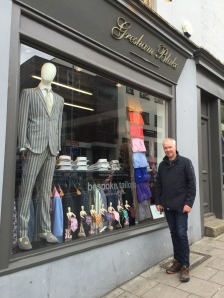 Guess what else they had in North Laine!!

Not my style of shoe but still worth a look.

Our guide, Julian, at the Oldest Pub in Brighton. 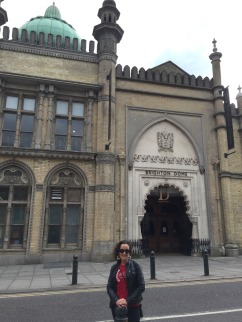 Me outside the Brighton Dome.

Mark so excited to finally get to Brew Dog! 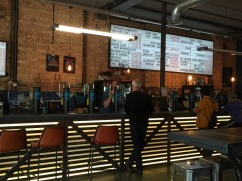 The paddle in hand!

They have IPAs here too.

A trendy pub/restaurant in Brighton.

Finally found a dessert wine back at Ginger Dog.