Today started as per yesterday with a morning visit to the gym and pool before breakfast.

We then went exploring around the local area and are now well versed in the locale for best wholesale and export of silver jewelry! We had planned to visit the Siam Paragon Centre for Mark but discovered on our journey that it didn’t open until 1pm due to a Buddhist holiday. So we headed to one of the many massage parlours for a foot massage to kill time.

From there we went on the sky train to Siam Paragon but soon realized this wasn’t what we after. This was no problem though as this massive Centre is linked to three others. A large storm had developed by this time so the heavy rain kept us trapped inside shopping for the next couple of hours. The high end stores wore thin pretty quickly and so we walked via the sky walk across to our stomping ground, MBK, where we had spent many hours in previous years searching out cheap Pokémon games for Tom.

A brief sustenance stop at a Japanese restaurant, Kobune, proved lucky for Mark as the only sized Singha beer they carried was Large; he suffered through this though.

MBK was pretty much as we remembered it so we left not long after lunch and buying a few fake t-shirts for Tom.

We caught the sky train back to the river and then took the hotel shuttle boat for one stop back to the hotel. The sun was out by this time which augured well for some relax time by the pool.

The plan for the evening was to visit the Silom night markets and then find somewhere for dinner. We caught the hotel shuttle and sky train to the markets but lasted 5 minutes before pulling out the phone to Google dinner options. TripAdvisor suggested ‘G’s of Bangkok’ so off we went in search using the TA map. After wondering in circles for some time we pulled out Google maps and then found the place straight away.

The other name for G’s of Bangkok is ‘The Beer Academy’. You can probably appreciate the joy Mark felt at eventually finding this place! The host was originally from Düsseldorf and so the menu was an eclectic mix of Thai and German. We had a lovely evening chatting with him and discovered why beer is so expensive here now. Taxes! Beer and cigarettes seem to be the main victims of this high taxing regime.

I was too tired to bother with navigating the sky train and feet home so we took a $2 taxi fare home!

Strolling the streets near our hotel 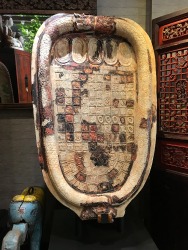 Only one size beer available for lunch 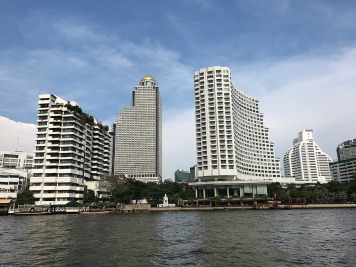 View from shuttle boat on the way home

Our hotel: viewed from the water

Major development across from our hotel 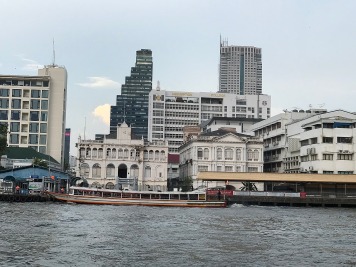 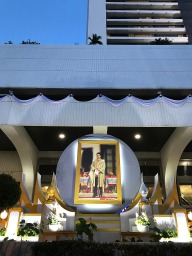 In memory of the recently deceased King 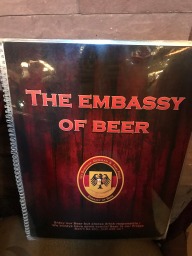 We finally found G’s of Bangkok 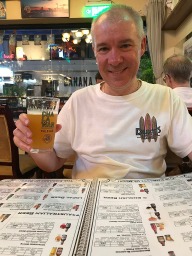