We woke in Bellagio on Tuesday morning to grey skies but at least no rain. We headed for the ferry to make the trip to Varenna where we were struck again by the spectacular views -villages nestled amongst lush green vegetation with rugged, limestone, snow caped mountains behind them. I contemplated the life of a ferry worker here with envy; fancy being witness to so much spectacular beauty on a daily basis…beats the classroom for sure!

From Varenna we traveled for 1 hr by train to Milano (local speak for Milan). The first 30 min hrs was southbound along the edge of the lake system before turning westward at Lecco for Milano. The train trip was further visual splendour. The others read but I couldn’t think of a single book that would have been able to seduce me given the visual options that I faced looking out the window.

The trip from Milano to Venezia (local speak for Venice) was fairly uneventful and lasted 3 hrs. This was good recovery time though enabling the kids to catch some sleep. We caught a vaporeto (local speak for water bus) to Rialto Bridge after our arrival into Santa Lucia train station, Venezia to meet our guide, Monica, who was to direct us to our apartment. All of this went fairly well; our apartment was large and in an ideal location but was the most poorly appointed of all so far and the most expensive! Anyway, this did not spoil our evening out to the internet café and dinner, nor the next day where we woke to clear blue skies.

I woke, yet again, well before the others so headed out to walk the Calles of Venezia before it became too crowded. I strolled through San Paolo whilst listening to the Italian top 40, I think, and got lost but, luckily, the sun was out so I could navigate my way home using the shadows filtering through the labyrinth of lanes. They guarantee you will get lost in Venice.

Mark and Tom explored the local produce markets after breakfast and bought salmon and salad for dinner before we took an excellent 2 hr guided walking tour of Venezia. This gave us a good background to the origins and history of the city. We now know why people would build a city on sinking mud and, how they came to be such resourceful merchants. The whole success and supremacy of the city hinged on harbouring the remains of St Mark, which were plundered from Alexandria. Religion rocks here!!! We can bore you with the details later. There are 65,000 Venetians inhabiting the city with 18,000,000 million tourists per year. Yet is my firm opinion though that all 18 million tourists descended on Venice during our stay…the city was BUSY!

We headed home for a rest from the crowds after the tour before venturing back to Basilica San Marco to have a good look inside. We could not enter the Basilica earlier in the day during our tour as the entrance was flooded due to the high tide. This is a regular problem in Venice; not only are the foundations of the city compacting and sinking over time but, global warming is contributing to higher tidal zones meaning that the low lying area around Piazza San Marco is subjected to regular flooding. By this I mean, take your shoes and socks off, roll up your jeans and slosh through the filthy water, maybe up to your thighs!!!! All attempts to solve the drainage issues in Venice end up being discussed for years, becoming political footballs and are still on-going. It is quite amazing to see the whole of Saint Marks Square flooded in the morning and then completely clear of water in the afternoon. The city is in a quite precarious situation.

From Basilica San Marco we headed for the Campanile, an old bell tower/torture chamber which has, as a modern claim to fame, the best views over Venice of anywhere. You get a good perspective of the hundred or so islands that make up Venice from up there.

By now it was time for a drink so, Harry’s Bar, home of the Bellini, called us loud and clear. Unfortunately, during this call they forgot to sing out the dress code for men (long pants only – Mark’s stubbies and singlet top did not get past the front door) so we will have to go back tomorrow.

We strolled home via a stop on the Grand Canal and had a drink and a chat with some Canadians before setting off for the apartment for a home cooked meal – 10 Euros of fresh salmon and salad vs the 75 Euros we paid the night before for pizza and lasagna that even Woolies would not put on the shelves. We purchased three small water colours of Venice and two small Venetian masks on the way home with feelings that today had been quite a full and productive one.

Mark and I went for an early walk through San Marco square. We headed for the Frari and produce markets before heading out to Burano and Murano. More later!

View of square from top of San Marco 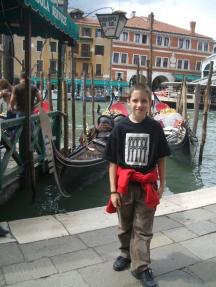 Waiting by Grand Canal on arrival