Friday 13th May: Cordoba Day.There were clear skies this morning which was most encouraging for us as we set out on a day trip via train to Córdoba. Our train left at 8.35 am and we were pleased to be able to find the necessary information clearly posted at the station. The arrival time for Córdoba was 9.45 which we hoped would allow enough time to find the guide for our 10.30 am 4 hr walking tour. The train trip passed fairly smoothly except we did have an aging ACDC fan who was singing their tunes off key in Spanish for most of the trip as well as taking weird selfies of himself.We arrived in enough time though to walk the 20 minute journey from Córdoba Train Station down to our meeting point in the historic old town. Our guide for the first three hours was a jovial young guy called Raffa and we started with a group of about 10 but this grew as the time went on. The first place we visited was the 14th Century Alcazar de los Reyes Christianos where there were beautiful gardens where Julius Caesar had once wandered and there was a symbolic tree planted in his memory. These gardens were just outside what had once been a Palace but had then gone through several subsequent incarnations with the most infamous as being a site of the Spanish Inquisition. It was noted that here on one Christmas Day over 100 people were burnt at the stake.

We then went on to weave our way through the old Jewish quarter and visited a 14th Century Synagogue that was built in the Mudejar style. It is noteworthy that this Synagogue was built by Muslims for Jews yet during a Christian era. There was an extended period of time when Jews, Christians and Muslims all cohabitated quite peacefully. The main stop for the day was during the last hour of the four-hour tour and this was to visit the famous Mezquita Cathedral of Córdoba. This had been the site of a Christian place of worship during Visigoth times that was later shared by Muslims and Christians for their respective worship. The site was subsequently purchased by Muslims and a Mosque, one of three hundred in the area, was then built. The Christian reconquest of the 13th Century resulted in the Mosque eventually being converted to a Cathedral and this structure was built within the middle section of the Mosque. This all makes for a rather spectacular site of an obviously Muslim exterior surrounding an ornate and extravagant Christian core. The tour completed by 2.30 pm and Mark and I found a tapas restaurant where we were able to grab some lunch and rest our rather weary bones. Our brains were weary too though as the last four hours had packed in a lot of history as well as taking in of magnificent sights. After lunch we spent some time wandering through the narrow lanes and walking down to the historic Roman bridge. This bridge has been added to over the years but still retains its original Roman foundations and was the only bridge in use across the river until quite recently. We left the historic center by 4pm and headed back up towards the train station for our 5.25 pm train back to Seville.

Once back in Seville we headed to the Old Town once again for one last look around the shops and a trip up to the roof-top bar at EMA that offered views over the Cathedral before heading home.

This was our last night in Seville as tomorrow we head to the oldest European city of Cadiz. 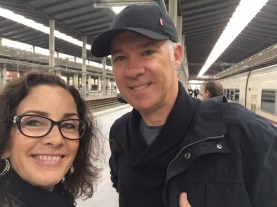 Mark & I at Cordoba.

The ACDC nutter on our train.

First stop on the tour. 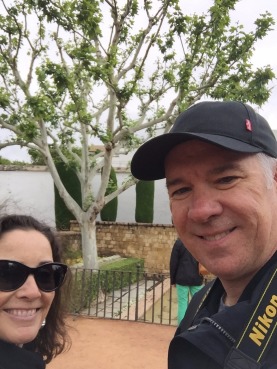 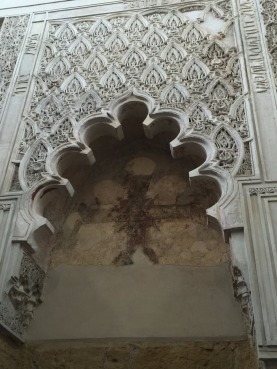 Islam & Christian script side by side at Mezquita. 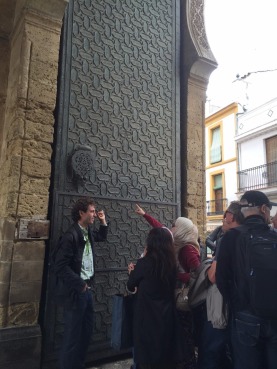 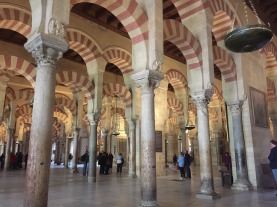 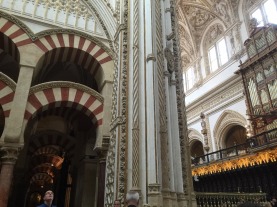 Transition from Mosque to Cathedral. 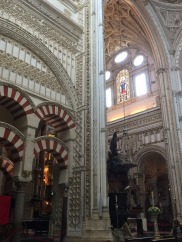 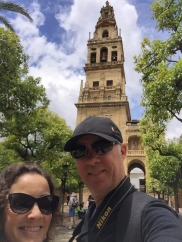 Us on way out of mezquita.

Us on the Roman Bridge. 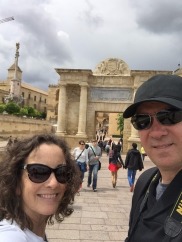 On Roman bridge looking back to town. 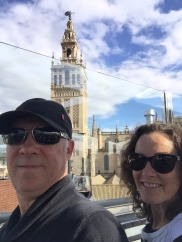 A final drink with view over Seville Cathedral.

My wine and the Seville Cathedral.

Another pit stop on way home on our last day.