It was a gloomy start to the Full Moon Buddha’s Feast day and we were glad we weren’t hanging around the city. Rain was forecast through until about 4pm.

Our Ayutthaya tour departed at 7.20am and so it was a relatively early start for us. It was raining by the time we departed so we were glad we were going to be ferried around on a bus for much of the morning.

We were the last stop for the bus pick up and so set off by about 7.30am. Our guide, Jom, gave us some background information about the day as we headed north out of the city. Our first stop was 60 km north of Bangkok at The ‘Summer Palace’ and we arrived there by 9 am. We were both surprised en-route though at how quickly we encountered rural surrounds given that the city centre is so crowded and highly developed.

The Summer Palace dates back to the 17th Century and is still used today as a residence and for official receptions and banquets. Most of the buildings are European in design, which struck us as rather odd, and laid out along an ornamental pond. Jom guided us through the sprawling Palace grounds for an hour and it was a most serene place but a bit of a pity that we had to rush through to visit the many different buildings. Jom kept up a good pace and would start her commentary at each stop regardless if only a few people had caught up with her. This was to become the general pattern for the day as we were later to find out!

We departed the Summer Palace by 10.15am and headed to our next stop, Ayutthaya; Bangkok is the 4th and current capital city of Thailand but Ayutthaya was the 2nd. The ancient city is referred to as an ‘island’ due to it being bordered by three different rivers. Our first stop here was at the ancient ruins of the temple ‘Wat Maha That’. This temple dates back to 1374 but was left to ruin after the fall of Ayutthaya in 1767 during the Burmese conflict. The Burmese cut the heads off all of the Buddha statues as you can see from the photos. We had about 30 minutes to stroll through the ruins and inspect the decapitated Buddhas.

We left this temple to visit a second temple on Ayutthaya island, ‘Wat Na Phra Mane’. The Ordination Hall had a most impressive large gold Buddha and the small Chapel next door had a large 1,500 year old Buddha made of green sandstone. Mark received a blessing from the monks at each Temple which consisted of being sprinkled with holy water and then donked on the head with the sticks used to sprinkle the holy water.

We departed this second Temple by 12.20 and headed to our 3rd and final Temple for the day, Wat Lakkaya Sutha, and its claim to fame is that it has the 4th longest reclining Buddha in Thailand being 42 m long and 8 m high. It was once covered in gold leaf but the Burmese removed this to leave the underlying white, albeit discoloured, stone. The statue was part covered in gold cloth for today’s festivities which weren’t to kick off until later this evening.

That was our final stop for the road trip part of the tour and we left by 12.50 for the 60 min drive back towards Bangkok to meet the cruise boat. The final part of our day was to be a lunch on the boat as we cruised down the Chao Praya back to Bangkok.

The cruise was pleasant and the time passed easily as we chatted over lunch with a young couple from Chicago. They were unexpectedly delayed en-route to Bali due to passport issues. Lunch finished with about one hour of cruise time left so we all went off to get a good vantage point to view the City for this final return section along the river. We docked at Riverside at 4pm and, luckily for us, we just had to walk next door to get back to our hotel.

Once back at the hotel Mark headed to the pool for a bit but I wasn’t keen for a swim so I updated this blog. We headed out down the road for dinner at around 6.30 pm and went to a little Thai place, Harmonique, tucked in a side lane where we’d been once before, many years ago, with the kids. We had good memories from the previous visit but they weren’t matched with this one. The food and service were bland, perhaps because we said “not too chili”, when we were ordering.

We wandered home a slightly different route so Mark could check out the sculpture shop near the entrance to the hotel. I expect many of these creations will be here when we next return! Check out the photos and you will see why. We also stopped by to see if Mark could pick up some more beer at the IGA but, alas,Buddha’s reach extended there too – no alcohol because of Buddha day!

We noted a street food market across from the hotel that seemed quite popular and mused that we might have been better dining there! Next time maybe! So, back upstairs for a glass of wine before bed. The plan for tomorrow is to do our own walking tour of Chinatown. Fingers crossed the forecast rain doesn’t eventuate! 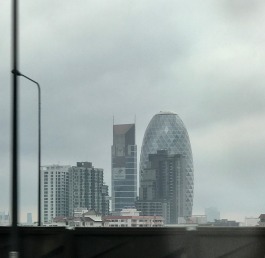 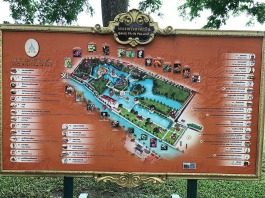 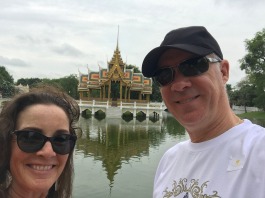 Us at Summer Palace

Mark was quite taken by this stall. Comments! Another hat for David Rowe?

Another hat for David Rowe? 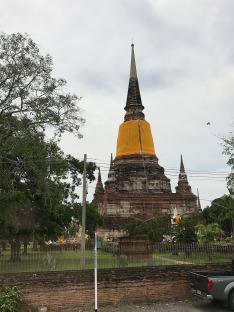 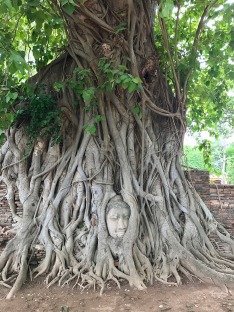 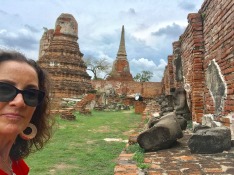 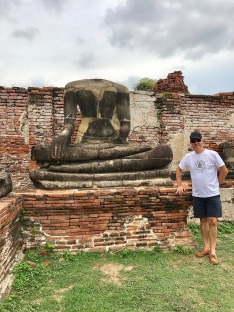 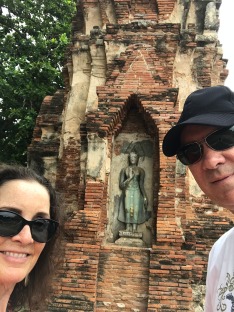 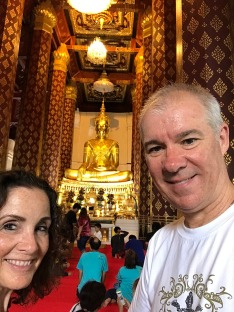 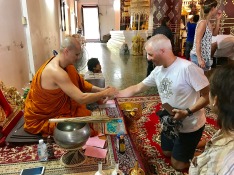 Mark’s first blessing of the day 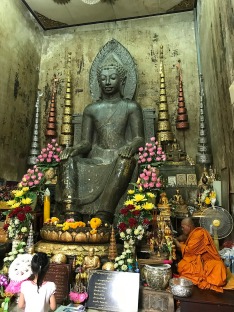 Mark’s second blessing of the day 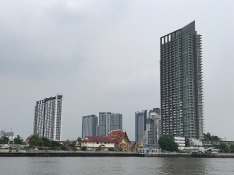 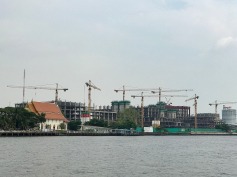 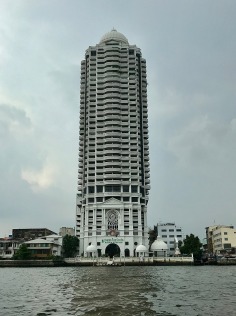 The Penthouse is less than $2 m AUD!

Stark contrasts all along the riverfront 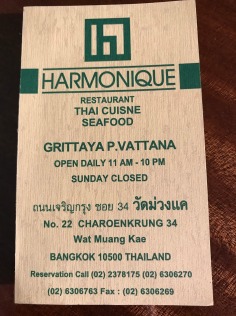 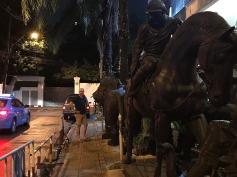 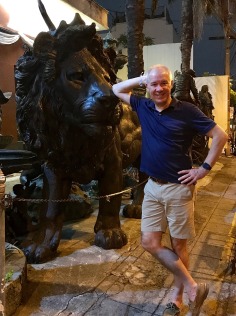 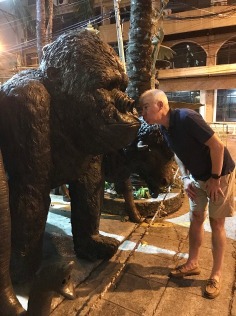 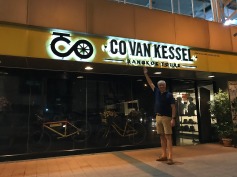