It was another sunny morning with the temperature predicted to be in the mid-20s. Our plan for the day had been to use the open top bus to get around the city and to check out all the sites we didn’t cover off yesterday. However, that all had to change due to a Marine Corp Marathon event that was occurring in the city today. Apparently it’s one of the biggest events of the year in Washington resulting in lots of road closures and, as a result, the open top buses offered a restricted route for the day so this wasn’t going to work for us. In the end we decided we’d rather just cover of a couple of things well so we opted to take an Arlington walking tour in the morning and then head over to the Air and Space Museum in the afternoon. Given all the road closures and metro interruptions that probably was all we would be able to achieve anyway.

We had to take the metro to Arlington as all the roads around the site were closed off. This was pretty easy with just one transfer. However, although very clean and with escalators at each station, for a planned city their metro pales against the great subway system of NYC.

Arlington Cemetery occupies 623 acres and hold the graves of 400,000 service people. 419 of these received the Medal of Honor and only 100 are non US citizens.

George Washington’s step grandson owned the land, about 1,000 acres, that went on to become the Cemetery. It was initially meant to hold just the 1861 Civil War dead but now has graves representing every US conflict.

There were three main points of interest on this tour. The first was the Tomb of the Unknown WW1 soldier and the Changing of the Guard ceremony that takes place here every 60 or 30 minutes around the clock and every day of the year. The guarding of the tomb is a process that represents a 21 gun salute with the guard walking 21 steps, turning and then waiting 21 seconds with this cycle on constant repeat. The Changing of the guard is a detailed process and one of high military style precision actions. It involves a detailed inspection of the incoming guard, down to the wiping a white gloved hand across the gun to check for dust!

The second point of interest was at the oldest section of the cemetery were the civil war dead were interned, the original Washington house and where Tomb of the unknown civil war dead was located. The latter being laid off to the side in a corner with little of the ceremony and showmanship that went with the 20th Century Tomb of the Unknown Soldier. I asked the guide about this discrepancy and she wasn’t sure of the reason.

The third point of interest was the grave of JFK. He’d been a fairly constant feature on all of our walking tours through this US and so it seemed rather appropriate to finish this tour of Arlington at his grave. Just FYI: JFK is one of only two presidents buried in Arlington.

It was a great 3hour walking tour and one I’d recommend if you’re ever in DC.

Our next stop for the afternoon was to find somewhere for lunch and then go to the air and space museum. Our guide suggested we visit the newly developed Wharf area and so off we headed. This is a work in progress though with only one real restaurant, apart from Shake Shack style venues, open on this day and it was struggling to serve meals in under 45 minutes. However, with few other options, we waited it out at The Brighton.

Following lunch, which turned out to be quite a tasty fare, we walked the one kilometre up to the Air and Space Museum and killed a couple of hours there before heading home via an Uber. We needed to pack up a bit before our dinner at Al Tiramisu , across from our apartment, as we had an early start the next day with an 8.30 am flight to Las Vegas. 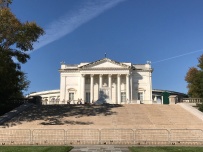 Tomb of the Unknown Soldier

Changing Of the Guard.

Mark loved this guy’s movies as a kid! 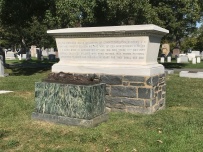 Patron who lobbied for Arlington Cemetery 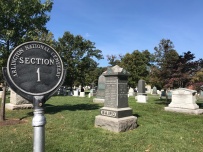 The Civil War section of Arlington 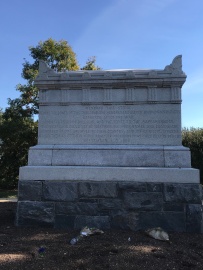 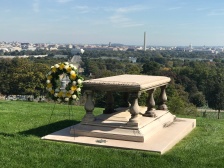 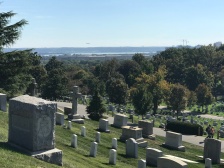 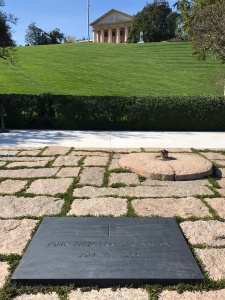 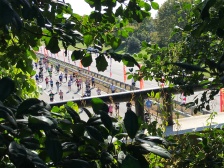 The new Wharf precinct at Washington: for a planned city they were pretty slow to develop their waterfront 😦

Us waiting for lunch at Brighton at the Wharf.

Brighton at the Wharf: a converted wharehouse. 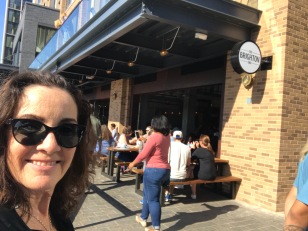 Capitol Hill in the background.

Mark at the Air & Space Museum. 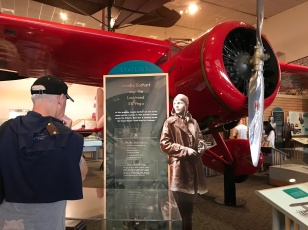